Today’s daily prompt is called “Undo” and asked: If I could un-invent something, what would it be? Well, that’s kind of a no-brainer for the Happy Quitter. I would un-invent cigarettes…the tobacco plant would be just an unwanted weed with absolutely no purpose. Yes, I think I would like this idea.

Health officials have known that more than 1 billion people around the world smoke and 4.83 million people die each year from nicotine and tobacco-related illness, according to the World Health Organization. That’s about one person dying every six seconds.  2.41 million in developing countries and 2.43 million in rich nations. This is a world-wide problem and will not just go away by it self.

Yes…I would undo the invention of cigarettes and cigarette related products. I knew all along it wasn’t healthy for me, I just never really wanted to know the facts. Like every other smoker I preferred to live a little bit in denial. I did notice the warning labels on the cigarettes for years…but overlooked them on each and every pack. It’s not that I can’t read…I just decided to not be bothered by some facts. Heck that might have taken the fun out of smoking a decade earlier :-).

If I could quit and stay quit…so can everybody. 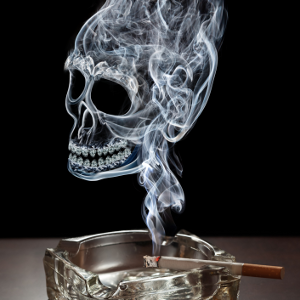 25 thoughts on “Mass destruction without weapons!”