I don’t know anything about baseball, but I know a thing or two about victories.

Once upon a time, there was a guy named Bob. He married young, worked hard and it took him only a few years and he was able to buy some land.

He didn’t like the city too much, wanted to raise his children the way he was raised, so he bought 30 acres of land, with a beautiful little pond in the middle of nowhere. It was far away from the city and he got the land cheap, nobody wanted to live there in the bunnies. Bob and his wife built a little house, had kids and loved it there. Here the kids could run and could be as loud and noisy as they wanted to be, nobody cared, they didn’t have any neighbors.  Bob built a few barns for the chickens and goats, then added a garage and storage sheds for his vehicles and tools. Life was good!

Bob was a truck driver, often on the road for days and he was always excited when he was finally on his way back home. He honked the horn twice, every time he pulled into his property, so the kids and his wife knew he would be arriving soon. Year in, year out…he honked the horn to say “Hello” and “Good bye” to his family.

Years went by; the kids grew up and left home. The city limits came closer and all of a sudden Bob received offers for his land. People wanted to buy part of his land for new housing developments. He denied the first offers, always said “Let’s wait a little bit, they will offer more” and he was right.

One day a guy came by and put the right number on the table and Bob sold part of his land, the acres on the other side of the pond. Half of the pond was still his and he kept a few acres left and right, because he really didn’t want any neighbors living close by.

They didn’t build just houses on the land that once belonged to Bob, no, they built mansions. Bob called it “rich people housing” and he was curious to see who would move in. One house after the next got finished and sold and then his new neighbors started to move in. They had housewarming parties, but Bob and his family were never invited, it hurt Bob’s feelings and he didn’t understand. Why wasn’t he welcomed?

Bob put the money in the bank and continued working and honked “Hi” and “Good bye” when he arrived or left. The new neighbors were bothered by the noise.

They never talked to Bob about it, or stopped by his house to get to know him, instead they hired an attorney and Bob received a letter.  The first letter went into the trash, right upon arrival. “Why didn’t they just talk to me” he asked us and we didn’t have the answer. Bob laughed it off, but he was upset. Nobody would stop him from honking his horn. Now he would honk twice now, just to piss them off.

The second letter arrived, the tone was more unfriendly and it went on from there. After a while there was a court date and Bob showed up, defended himself and lost. He wasn’t allowed to honk his horn anymore.

Bob didn’t understand. How could they forbid something that he had always done? He didn’t say much, he obeyed the law, even though he didn’t like it. Why were people bothered by the simple noise of a trucks horn?

He was quiet for some time and then one day he called all his friends and invited us for a big BBQ over to his house. Bob’s BBQ’s were feared by many, not just me. Most of us had left there before with a drink too many and we had paid the price the next day.

Bob makes a heavenly BBQ and we all showed up, brought our coolers, fold-up chairs and too many side dishes and desserts.

The kids were playing, adults were standing around. There was lots of laughter, the plates were full and everybody had a good time.

We all noticed the new barn on the property, but didn’t pay too much attention. He would tell us what was going on soon enough.

A truck came around the curve and pulled into the property, we thought it was one of Bob’s coworkers. That was not the case, it was a delivery truck and the freight was rather unusual.

Bob had bought donkeys, 3 to be exact. They left the trailer and were guided into their new home. The donkeys seemed to like it; they were exploring the barn and the field around it.

Later on, after we all had our bellies full, we sat around the fire when the donkeys started to make some noise. They were loud. It was feeding time and Bob said “let them wait a few minutes”. Some of us had tears in our eyes from laughing so hard.

It took a while until we all understood why he had gotten the donkeys. I would have loved to see the neighbors faces, when they found out what was going on.

It only took a few days and another attorney letter arrived, this time with the goal to force him get rid of his donkeys. There was another court date and this time Bob won.

He kept his donkeys along with all the other farm animals he always had. I do wonder if his neighbors wish the honking horn would come back.

Bob got the last laugh and his victory in form of 3 donkeys.

I truly believe life writes the best stories. You just have to lean back and enjoy what is going on around you. 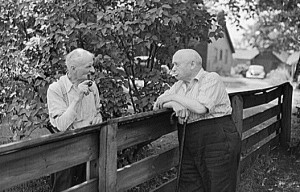 In your own life, what would be the equivalent of a walk-off home run? (For the baseball-averse, that’s a last-minute, back-against-the-wall play that guarantees a dramatic victory.)

26 thoughts on “Revenge of a Jackass”