My husband is smoke-free since one month as of today. The first two weeks were tough on him; he had his moments, but they never lasted long enough to get the frying pan out.

His suffering and the withdrawal from Nicotine is over since a while; now the withdrawal is in his head; that’s what addiction is all about. Overeating, Drinking, Drugs, smoking, gambling -you name it. Whatever our poison of choice is, we do it because we long for the good feeling it seems to give us.

“Change comes from within.” I honestly believe that. We don’t become healthier by purchasing a treadmill; we don’t become more organized by buying another filing cabinet.

His last pack of cigarettes looks crumbled, it’s now on a side table in the living room, he forgot all about it. He carried it around with him for about two weeks. 11 cigarettes were left when he quit; now there are only 9. One of his young co-workers bummed three cigarettes from him.

Why did he carry the cigarettes with him? Why did I keep my last cigarette pack in the freezer for weeks?

“Change comes from within.” We both quit without peer pressure. We quit because we wanted to, it didn’t matter if cigarettes were around or not. I believe having them around helped us during the first days.

My husbands old, beloved Zippo lighter is resting in our bookshelf. “It’s a collectible item now,” he said when he put it there.

“Was it easier or harder than you thought it would be?” I asked him knowing what he would say. “Much easier,” he said and verified what I had felt. He doesn’t struggle anymore, he doesn’t have mood swings, he is cheerful and in a good mood as always.

I bought him a card and we will celebrate his one-month anniversary. It’s the first of many milestones yet to come.

I am proud of him!

A genuine change must first come from within the individual, only then can he or she attempt to make a significant contribution to humanity. – Dalai Lama 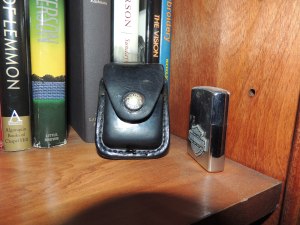 14 thoughts on “Change comes from within! A One-Month Celebration”