I remember how I met Princess Leia, I watched her on the movie screen when I was just 14 years old. I became a Star Wars fan and that hasn’t changed until today.

Carrie Fisher and I go way back. Somehow she has always been with me, still is, even now since she is gone. I followed her throughout the years, read her books and loved her wit and her honesty.

She was wonderful and very refreshing in the Hollywood glimmer world. She didn’t pretend, she didn’t want to fit in. That’s what I  liked the most.

I am only in my 50’s but I learned to say Goodbye now, it’s a part of aging. In the end, we all have the same destiny, some of us sooner than later. Saying fair well is part of the journey.

Carrie Fisher, my (our) Princess Leia died this week and my first thought was about her Mother Debbie Reynolds. Parents outliving children, that’s tough.

Years ago, when I still worked as a translator I met Debbie Reynolds. I didn’t work for her, but around her. She was a spitfire, and I wanted to know more about her so I bought her biography and ask her to sign it. She did and I felt very special. I still have that book. 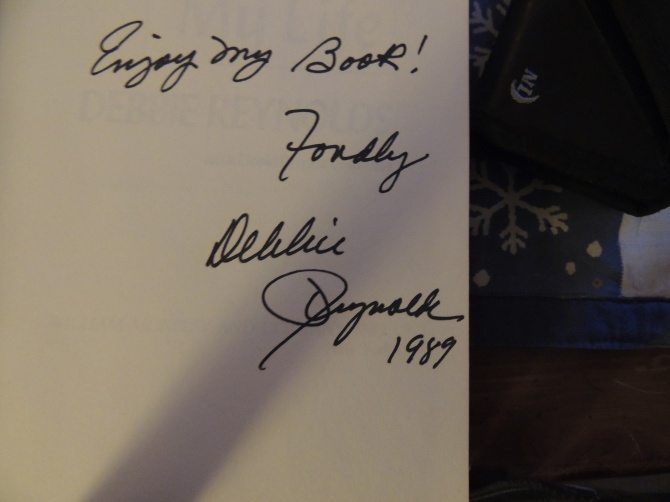 Today I can’t help but think of her and I remember one of my friends.

I met her a couple of years ago, right after we had just moved into our new house. She was a tiny fragile lady, she stood at the fence and welcomed our dogs and then us -precisely in that order.

She was in her late 80’s then and I knew that friendship would end with heartbreak on my end, but I didn’t care. I fell head over heals and we had fun together. She always had a bottle of sherry around, and I spend hours sitting in her living room laughing and talking.

“What makes you think your God is ready for you,” I replied and we both laughed.

Later on, she got serious. Her kids were in their 60’s then, the oldest was already 70. She didn’t want to be around, feared one of the would pass away before she did.

“I couldn’t handle it,” she explained, “I am getting too old,” and I understood.

She got her wish, she died when she was 94 and all her kids, four to be exact, were still healthy and well.

I just read about Debbie Reynolds death and it shocked me, but I also understand. She couldn’t handle it, the death of her daughter was too much.