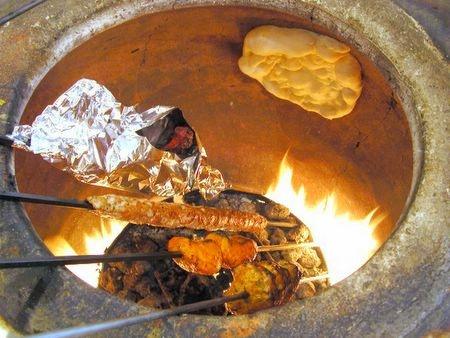 I just finished reading Derick’s blog and when he mentioned his dinner -a Tandoori take out- I couldn’t help but smile and my mind wandered down on memory lane.

Back then, when I still worked as a translator, a client had invited us to feast at his new Indian restaurant. Proudly he showed us around, and we all congratulated him on his new place and wished him well.

We weren’t allowed to order our dinner. He had insisted to prepare something special for all of us. When the food was served, he explained the appetizers to the ones who weren’t familiar with Indian cuisine.

“I still am not allowed to use the tandoor oven,” he told us mumbling a some Indian curse words, which were followed by a quick bowing of the head -asking for forgiveness for the lost temper.

With disappointment, he pointed to the big tandoor clay oven, in the corner of the restaurant. “I had it shipped from India,” he told us and shared with us the trouble it had cost him ever since.

“The health department is asking me to get it inspected before I can use it,” he said and he looked so helpless. “Nobody inspects ovens in India,” he continued and we all nodded.

“Now I have to find an Indian inspector for my tandoor,” he sighed and we all felt sorry for him. Surely not an easy task. He showed us a letter from his uncle in India. “He helped me getting the oven here, now he doesn’t know what to do either.” He waved the letter around in the air like it could solve his problem.

“I know, I know,” he said and laughed. I am going to stick the letter from my uncle on the oven and tell health inspector it was inspected.” We all laughed and finished our meal.

Weeks later my husband and I came back for a romantic dinner and this time we were able to order the tandoori chicken.

“So you finally got the oven inspected?” I asked and he snickered. “Come see,” he said and grabbed my hand.

On the side of the tandoor oven, there was the INSPECTION note, the handwritten letter from his uncle.

I looked at him in absolute disbelieve.

He nodded and snickered.

“Told health inspector it was the inspection for the tandoor oven and he gave me permission to use the oven.”

I always thought that’s a wonderful example of how many things work these days. We try to be overly cautious, just to be fooled by the simplest thing in the end. To this day I can’t eat Indian food without thinking about the Uncle in India.

10 thoughts on “A Letter from the Uncle in India”