Lent was a big deal in our Catholic boarding school. 40 days of fasting was the motto, which didn’t bother us too much, we were used to it. Boarding school food is a bit like hospital food, and fasting comes naturally.

The nuns were all in -of course- and they made sure we took lent serious. The closing of the candy cupboard was a cruel thing to do. Once a week in the evening the group-nun opened a big old wooden cupboard full of candy and snacks.

We stood in line in our pajamas and nightgowns, waited eagerly to take a peek at candy wonderland. We were allowed to waste some of our allowances on candy, and we couldn’t wait to spend our money on gummy worms and chocolate bars.

Old recycled yogurt cups were used as containers, and the nun counted out gummy bears and licorice piece by piece. The amount of money we spend was deducted in our allowance book. The nun made sure we didn’t spend over our limit, the rest of the money had to be used for bus and train tickets, school and craft supplies and unexpected extras.

The nuns bought the candy in bulk at a store similar to Cosco or Sams, just the German Version. They made a nice profit from our candy addiction. Quite a business they had!

The rich kids could afford chocolates I had never seen or heard of. Swiss chocolates, Katzenzungen (Cat-tongues) or truffles. We traded fair and square and I became a master of this trade. Two Cat-tongues for 2 TBS of my Grandma’s homemade Braunschweiger. One Truffle for 1 TBS of her homemade Strawberry jam. Life was good!

No candy for 40 days, at least not officially. We had our ways to smuggle in cigarettes, candies, magazines, sweets and even alcohol right under the eyes of the Nuns every time we returned from a weekend at home. Secret hiding places and smuggle trails were handed down from class to class in a night full of funny rituals.

Candy-wise we were fine. Fasting and the endless prayers were nothing new to us, so no surprise their either.

One year Sister Martha, our group-nun that year, had an extra idea for Lent. “In your mind, pick a kid you don’t like,” she said. Well, that was easy, Gaby H. I couldn’t stand her. Everything about her bothered me.

“No matter how you feel about that girl, for the next 40 days do something good and make sure she never finds out who did it.” What the Heck? First, you want me to do good, and I don’t even get bragging rights? What a  messed up Lent torture was that?

We were advised not to share the name of the girl with anybody. If we followed the given rule or not was our choice. No problemo! I am not going to do it!

One morning I came back from the bathroom and saw my bed had already been made, and there was a small gummy worm on my pillow. Again, WTH? Does that mean somebody does not like me? Get outta here!

We all saw kids sneaking out of sleeping rooms or classrooms. Little surprises were left everywhere, none of us said a word. We were no snitches!

Just one kid didn’t get anything. Gaby H. Good grief why did they make my life so complicated? Not having something done for you meant everybody liked you. What a tricky game that was.

To this day I don’t know what bothered me most. The idea that Gaby H. thought she was liked by everybody or the fact that I was obviously the only one who had picked her? I suppose I disliked both thoughts equally.

Nevertheless, a few days later I found myself tiptoeing into the big bedroom she shared with others, and I made her bed, even left a piece of my favorite licorice on her pillow.

I got many surprises that year. My shoes had been polished, my nightstand was better organized. Something sweet was left in my cupboard, cards and little notes were left on my desk and I wasn’t the only one. We all found small little surprises everywhere we went, or someone had taken care of or chores already.

I even got a new book. Either I had a Lent fairy who worked overtime, or I was disliked by a nice amount of people. Oh dear, that didn’t make me feel too good.

I left thank-you-notes, and raised the bar with Gaby H. as well. Before I knew what hit me, I shared things I liked with my arch enemy. I gave her a book and my beloved magazine, not to mention candy that I had to buy in the village store because Gaby had complained about the stupid licorice on her pillow at dinner time.

Finally, Lent was over and we all drove home for a small Easter vacation. The same group as always waited for the first train to arrive, later on we would spread out to Austria, Italy, Switzerland…some even further. We smoked and chatted like always, we put on eyeliner and lipstick -which was forbidden in boarding school.

Then we talked about the Lent challenge and most of them started laughing. I told them about my “girl” without mentioning her name. “Gosh, it has been hard, I really don’t like her,” I confessed and the laughter got louder.

“Hey you dummy, you pick a girl you like, we all did,” the oldest one explained and I didn’t know what to say. Turned out the Lent challenge given by our group nun was something she did every year to her new class. Everybody had known about it -almost everybody!

To this day I remember the mix of emotions. It made me understand giving! It makes you feel good when it comes from the heart, it should never be forced! 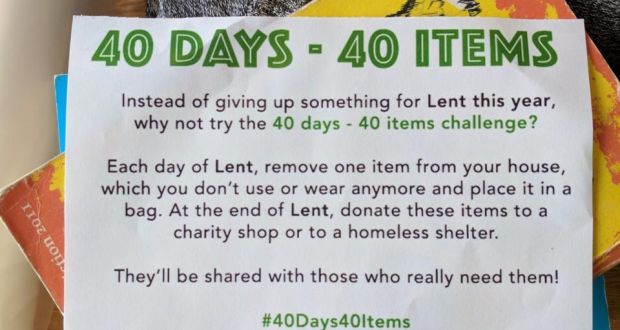 Now that’s a Lent Challenge I would approve of!