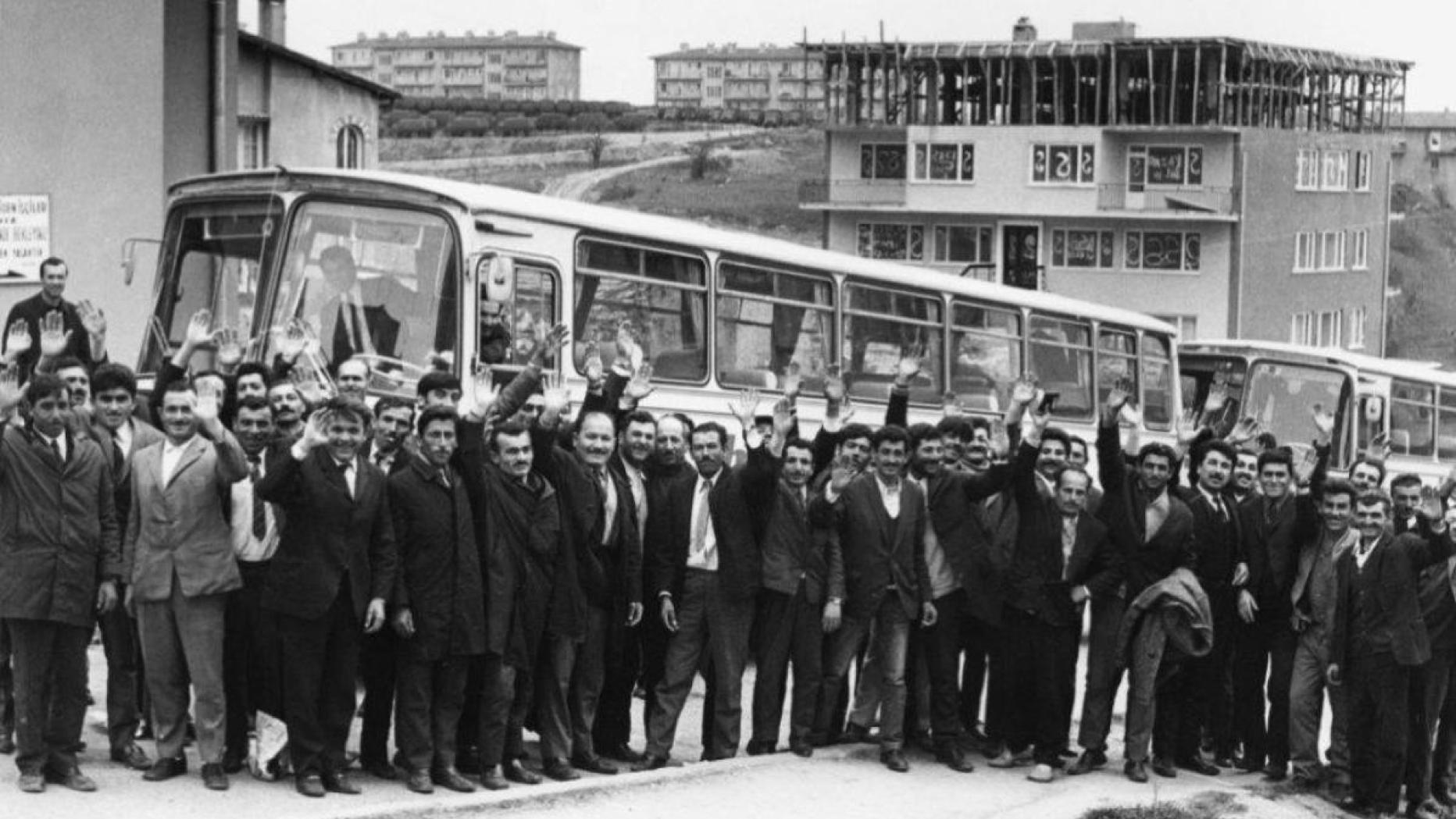 The first migrant workers arrived in Austria, following an invitation from the Austrian government.

I was born 4,500 miles away in a small village in the Alps. One foot one the Italian side, the other on the Austrian side my Grandma always joked. I met Gastarbeiter/Migrant workers), who were guest/gast in our country, invited by our government. Most of them came from the former Yugoslavia, a few Turkish men followed the invitation as well.

Hard to believe, but a few ended up as farmworkers in our small village.

I grew up a racist but didn’t know it. I repeated what I heard without thinking, felt uncomfortable around the foreign workers because everybody else did. They were men in a country far away from their families. Many of them had wives and children back home but didn’t see them for many years. They worked, made money, sent money to their families, and worked some more. The first phase of the migrant workers happened between 1967 – 1973. I was just a little girl, 5 years old 1968 when I met the first men who didn’t belong.

Their skin was darker, just like the people in the South of Italy, but they didn’t understand our language. They ate and dressed differently, they stood out and we made no attempt to change that. We needed them to work, but didn’t want anything to do with them -even though we had invited them into our country. They worked in our fields and in our factories but weren’t invited into our homes -and lives. 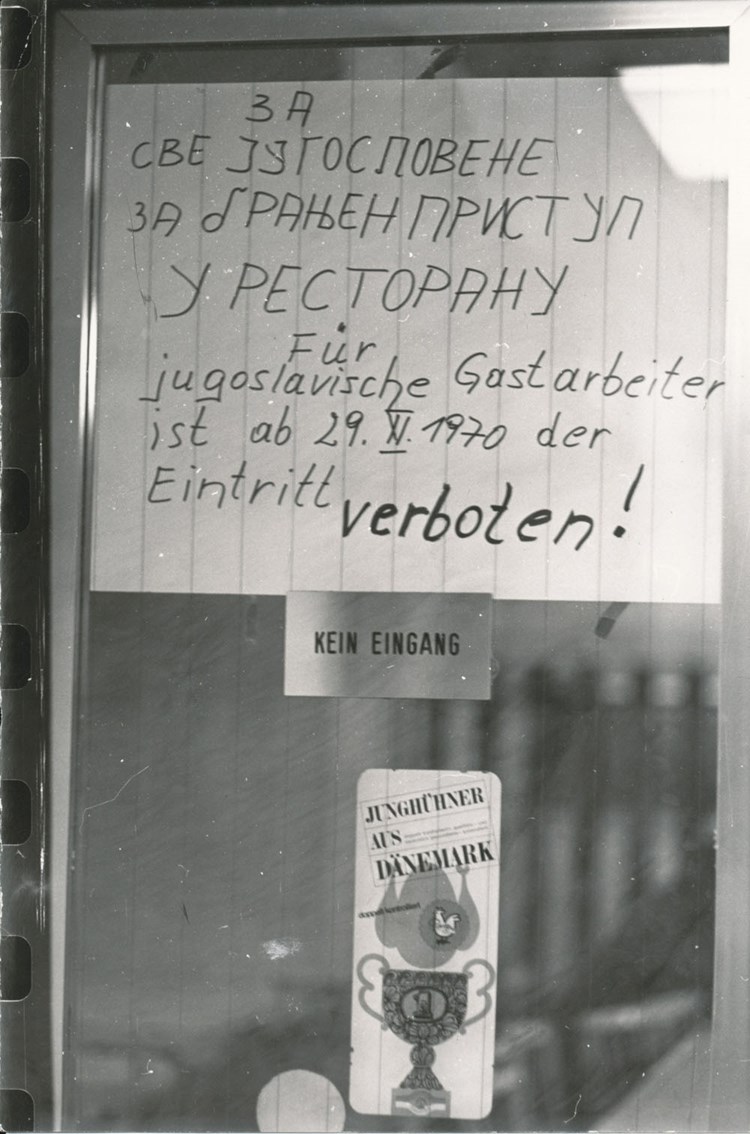 “Entry is prohibited for migrant workers from Yugoslavia starting February, 29th, 1970.” Until today I didn’t know those signs were existing and I feel ashamed.

Women and girls were asked to be careful around them. A few foreign men had dared to date some of our women -which was unimaginable. You don’t date men like that, I had heard but didn’t really understand. A few incidents were reported, which made us judge them all. As always we concentrated on the 2% who behaved wrong and forgot about the 98% who did everything right.

I would have been just like all the other villagers, if my Grandma wouldn’t have managed to get me into a private boarding school in the South of Germany. To this day I have no idea what kind of deal she made with the convent, but my fate was sealed. I would go to school, learn, and live in a different country five hours away from our farm.

And so I became another foreign girl in a boarding school full of girls from all over the world.  There was no time for hate or distrust, we were united in our ‘fight’ against the authorities, who happened to be Catholic nuns.

The boarding school, my home for many years.

Where we came from didn’t matter, how much money our families made -or needed- didn’t matter. In this old building we were all the equal, we wore the same school uniform, had the same amount of money in our allowance book.

We talked proudly about our culture, shared them with our friends who wanted to know more about the way we lived, just as much as we couldn’t wait to hear more about their way of life. The ones with rich parents used the extra money they had stashed away to buy treasures like my Grandma’s homemade Braunschweiger or the handknitted sweater I didn’t care for. The farm kids like me, traded their treasures for luxury items they had never seen before. The rich kids learned about a different way of life. Our differences became our strengths.

I tutored a girl who was dyslexic and when we became good friends, I joined her on her ride home when she got picked up in the families Porsche. The chauffeur dropped me at the train station closest to their home on Friday, which saved me 3 hrs of a long trip with buses and trains, and Monday in the morning he was waiting at the same spot on my way back to school.

One weekend she came home with me and she admired our way of life. I heard sadness in her voice when she talked about her parents, who were always traveling. She was the first one I shared the secret about my alcoholic parents with, nobody else knew why I lived with my Grandma. The rich girl felt poor on our farm, the poor girl felt rich. It’s funny how it can work if you dig deeper.

My friends came from Spain, England, Arabia, even a girl from Lebanon learned to love Braunschweiger and my currant jelly, the same way everybody else did.

Joining the catholic classes was mandatory for all, so was attendance at church every morning and the daily prayers before we were allowed to enter the dining hall, but surprisingly enough, all different religions were respected equally and various classes were held in the afternoon for the Jewish pupils, as well as for the Lutherans and Muslims. Gods with different names were accepted and lived among us just like we did.

I had never heard of different religions and felt curiosity. How come nobody ever told me?

Besides learning in school and being educated by nuns and teachers, I was fortunate enough to learn from my friends about their homes, their traditions, their families. My life got enriched in many ways. Perhaps DIVERSITY and accepting it as part of my life was the greatest knowledge the school gave me.

I grew up and the tiny village I called home, soon felt too small. I didn’t fit in anymore and while I couldn’t pinpoint it, I felt it.

I came home twice a month -and for vacations only- and when I got older I often skipped a weekend and went home with a girl from school instead, who did the same two weeks later. Weekend sleepovers, meeting families so far away who soon felt familiar.

Take the blinders from your vision,
take the padding from your ears,
and confess you’ve heard me crying,
and admit you’ve seen my tears.

Hear the tempo so compelling,
hear the blood throb in my veins.
Yes, my drums are beating nightly,
and the rhythms never change.

“Born a racist – Changed by Life” To be continued tomorrow…

5 thoughts on “Born a Racist -Changed by Life!”